I recently had the pleasure of recording and producing a couple of audiobooks with hollywood royalty Mr. Carl Reiner in Beverly Hills. He lives in the same home that he wrote the Dick Van Dyke show in back in the early 60’s. He’s a very nice man and still keeps busy at 96!

I’ve been up to the Pacific Northwest a few times over the years for recording sessions and I usually go to Studio X in downtown Seattle, which is a very nice facility. However recently I travelled up to Bastyr University to record an orchestral film score in their chapel.

Located about 1/2 hour north of Seattle (in the middle of a forest!) Bastyr is unofficially called the “Harvard of Natural Medicine”. The chapel sits on the grounds of what used to be a Catholic seminary. I was told its been “deconsecrated” and now can be rented for non-denominational weddings or recording sessions – your choice!

Its a really cool and beautiful place. Outside of a 20 minute period when the stained glass mosaic windows were cracking as the sun heated them, the sessions went flawlessly.  The staff was top notch and the mic selection was great – M150′s for the tree, a great selection of Neumann, Shoeps and Sennheisers for spot mics (basically the same mics I’d have here at the studios in LA) and big racks of Millennia and Grace mic pres. They are totally setup for recording there with baffles, risers, etc….heck I even saw a set of tymps in the back.

Oh………. and the place sounds absolutely fantastic! Forty foot ceilings, marble walls and floors and wooden pews. I was able to get the wide and surround mics way up in the air on telescoping stands and really capture the sound of this beautiful space. Altiverb, Bricasti etc…… dont sound anything like this. 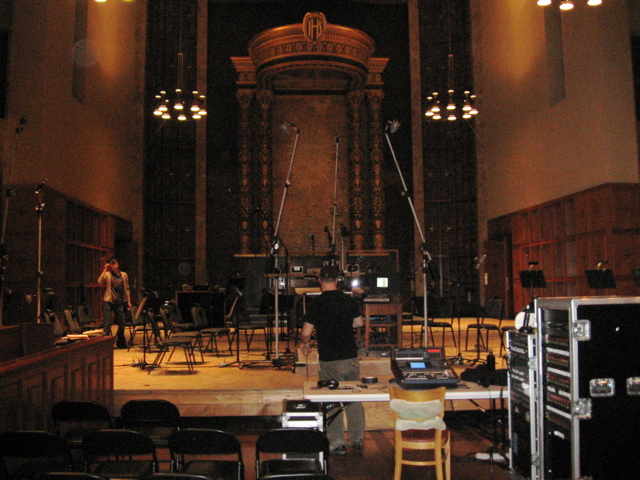 The scoring “stage” at the chapel at Bastyr University in Seattle.

The “control room” is not so great. Its basically a small room where I was told the priests used to store and change into their robes. But its not a mix facility and thats fine.  I knew I had what I needed. 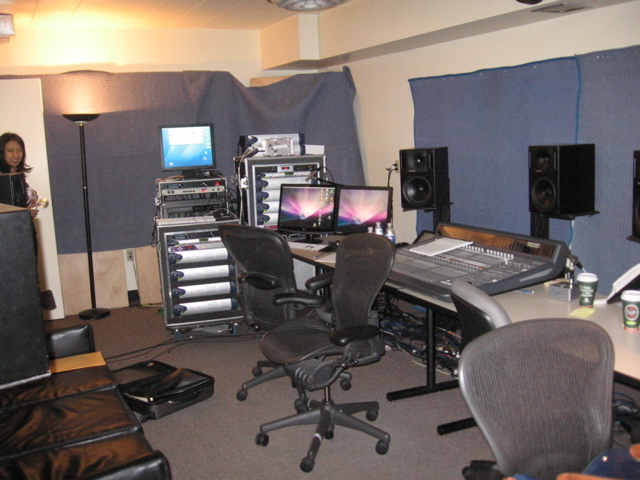 All and all it was a blast and the tracks sounded great. It was fun hanging out on the campus, eating a healthy lunch in the student cafeteria and then taking a walk in the surrounding woods of St. Edwards State Park. Where in LA can you do that????

We had the run of the place, but the main events were held in the “Los Angeles Room” –  a 2000 seat ballroom that has a lot of history. In 1967, 1300 LAPD clashed with about 10,000 Vietnam War demonstrators as President Johnson campaigned at a Democratic fundraiser at the hotel in this very same room! There are pictures on the wall of all the past presidents that have stayed there and you can feel it. Its definitely old school.

Audio wise, the in-house company had a nice sounding JBL Vertec line array system flown left and right (6 cabs per side), complimented by 4 dual 18″ JBL subs (2 per side). Not a huge system, but enough to adequately cover the main ballroom for this type of event. There were also fills for the far corners of the ballroom and another small JBL array that was the center cluster. I had them add some front fills for the seats closer to the stage.

The house also provided a Yamaha PM5D which worked just fine for our monitors. I’m an Avid guy and I wanted at least a Profile for FOH. But instead I got the SC48.

It was my first time using the SC48 and I gotta say, I loved it. Its a bit more compact then the D-show I’m used to, but it sounded great! I was able to configure the whole show here at home and email the system tech my file which he loaded in and setup (while I was sleeping) the night before. He was able to eq and delay all the outputs for the different speaker systems and I configured the record/broadcast setup (FOH mix plus audience mics) and routed it totally digital via the built in firewire interface to my MacPro running ProTools LE, with my mastering plugs on the inserts and it was da bomb. I bought my ilok, loaded my plugs into the SC48 from a flash drive in 10 minutes and everything worked flawlessly. This Venue system is a joy to work on. 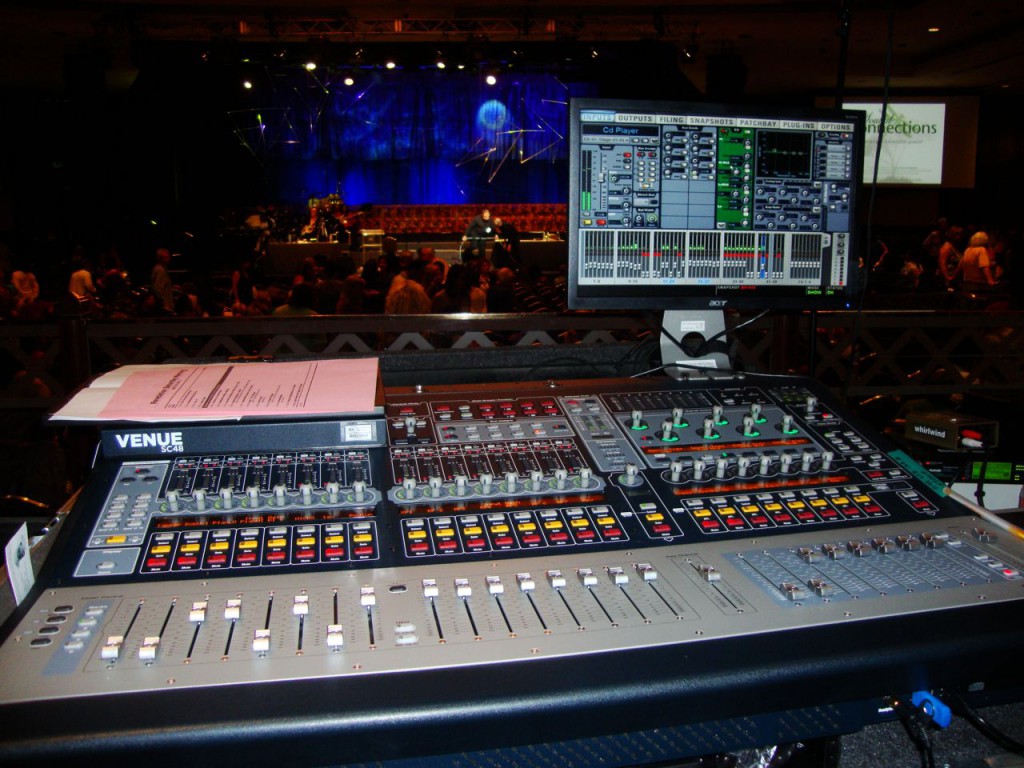 SC48 at the Century Plaza Hotel

I recently was lucky enough to record and mix a small (30+ players) orchestra date at the Village in West LA.

The string players here in LA are just fricking awesome. This group was especially great as they play on all the big movie dates in town, so their chops are A++. It never takes them more than 3 takes to nail it no matter how tough the parts are.

It was pretty crowded in the studio so I put the solo trumpet upstairs. There was just no where else to put him. Its really live up there so in addition to a U67 up close, I put up a stereo pair about 10 or 15 feet away and it was the surprise of the session. It just sounded great up there! So that room is useful for more than just Waves parties……

Here’s a video of some of the session with keyboardist/arranger/composer Tim Heintz conducting.

Pro Tools HD on my Hackintosh!

I have wanted a new Powermac for a long time. But in 2005 when Apple went to Intel processors they also started putting only PCI-e slots in their tower desktops. My Pro Tools Core and Accel cards (which I bought in 2004) are PCI-x, not PCI-e and the crossgrade price is $2700  – FOR THE SAME CARDS!  That’s about as much as a new Powermac alone! So for the last few years I’ve been angrily limping along with a dual processor G5 .

Today I’m the proud owner of an 8-core 3.06GHz “Hackintosh” that I built myself, running Snow Leopard and all the Intel apps I could never run before. It all fits in a server case instead of a giant tower and everything works great. It works with my ipod. It works with my camera. There are a couple of things I would like to be different, but the fact that it cost me about $1300 for all the parts makes me forget about those pretty quickly. 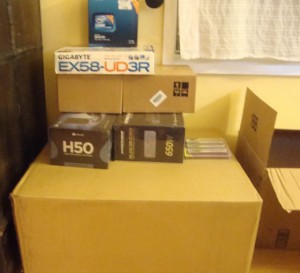 Lots of presents for me this xmas. 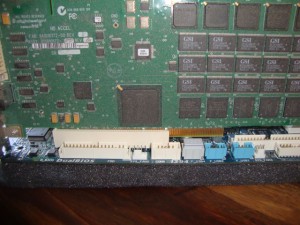 This was alarming – but it works just fine! 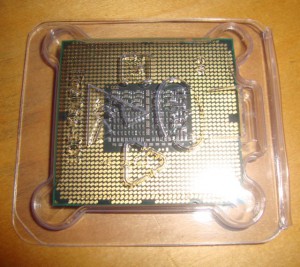 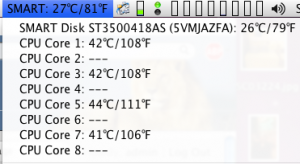 Which shows up as EIGHT cores on my machine. 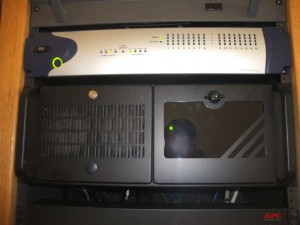 My Hackintosh -tucked away in my rack…..

Its definitely a bit of a “science project” and it took me quite a bit of time and a few RMA’s, so I don’t recommend it unless you are a patient, tinkering type of computer geek. In fact without help from a good friend who’s built a few of these, it would have taken a lot longer. But I learned a ton and I’m still using my PCI HD core and accel cards for a while.

Rockin out at Sunset Sound

The last couple of weeks I’ve been fortunate enough to be recording and mixing a bunch of great tracks at the historic Sunset Sound for Kevin Nadeau Music. We were holed up in Studio 2 behind the 80 series Neve and we covered a lot – from slammin rock, to classical guitars and Rickie Martin type pop tracks.

We pretty much had the run of the place, so I had access to all their fabulous collection of mics, live chambers and outboard gear. 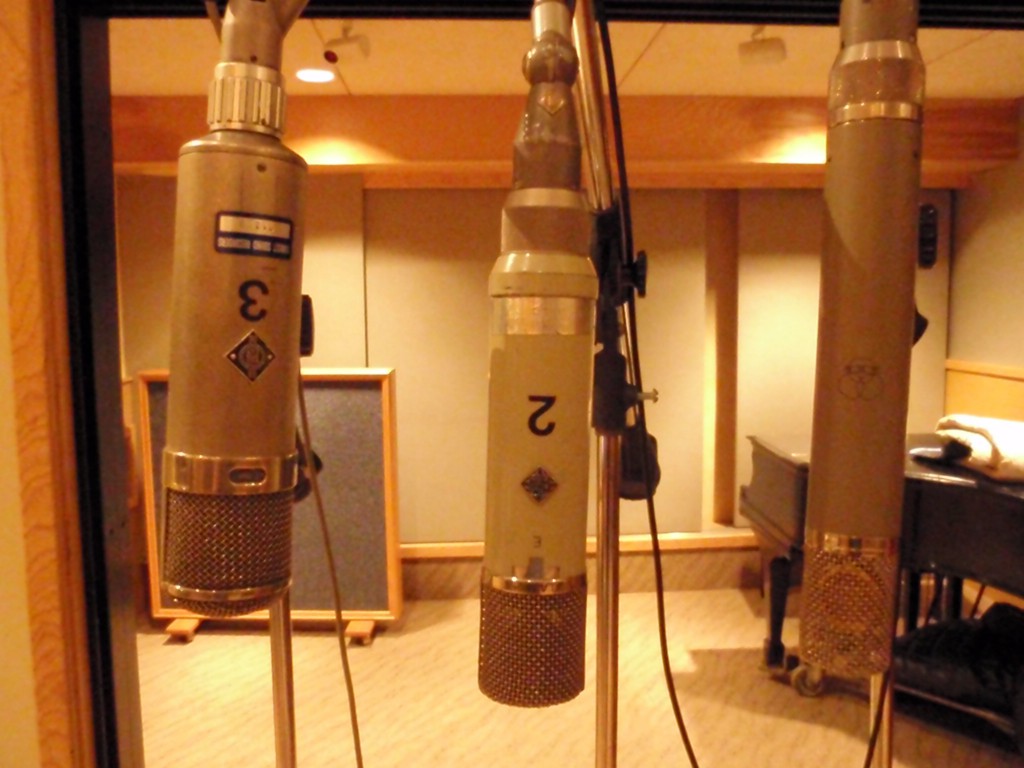 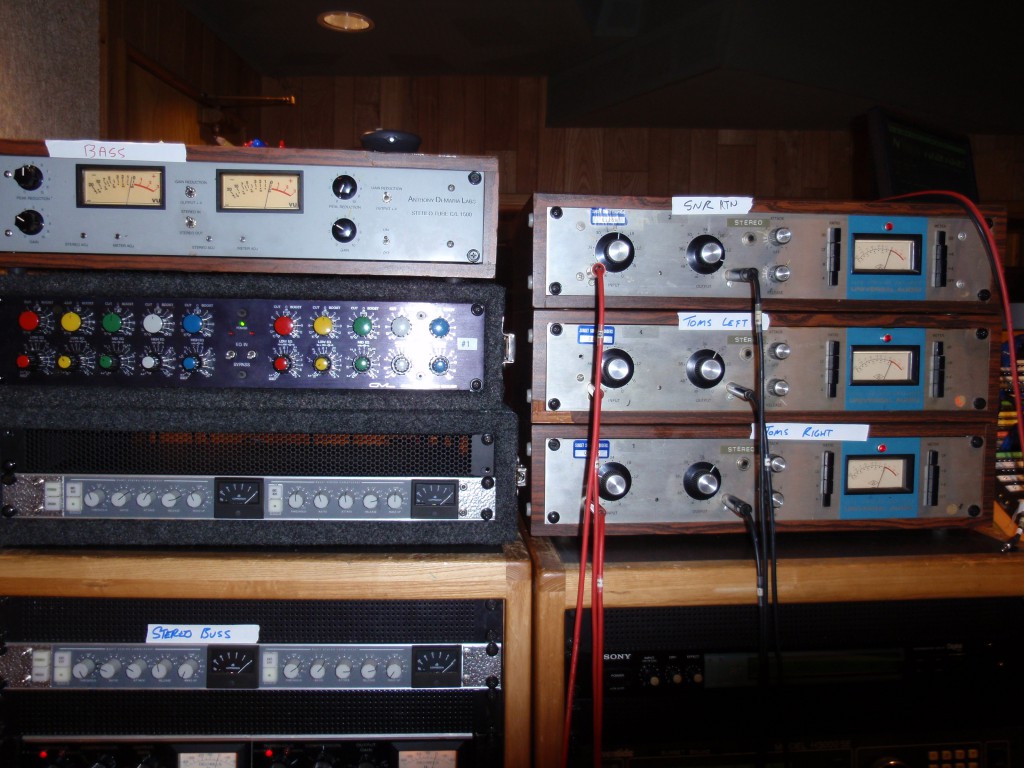 This is my first time using the ADL C/L 1500 and I liked it a lot. It definitely is a special sounding unit and it was just the trick for my drum overheads on a couple of tracks.

The GML8200 EQ is a classic. A great sounding, musical and very precise parametric EQ. The top and bottom bands can be set to shelf as well.

The “blue face” 1176’s are a favorite of mine. I like the black ones too, but the blue ones are a little more special on drums.

Alan Smart designed the original SSL  stereo bus compressor, and he’s got his own version for sale. Its very similar to the original, but is much more flexible and has the “crush” feature as well. Sunset Sound is the US distributor for these.

This week I had a session with probably the biggest mallet setup I’ve ever seen: The guy can really play too. No sequencing here.

AND THEN the guitar player came in:

We just let him blow like this for about 45 minutes. He was amazing. People in the hallway were coming in to the studio just to check it out!

All my days should be this fun.

I just finished a project that called for authentic sounding 30’s music. The session was at The Village in Studio D – acc bass, drums, guitar, piano, sax, clarinet, 3 violins and solo vocal.  I studied authentic 30’s recordings and thought it through, choosing my mics carefully and arranging the players around the room so it wouldn’t sound too ambient even though I knew they didn’t use too many mics back then.

It came out really nice. However as I mixed, and compared it to actual recordings done in the 30’s, I put an LPF on the master fader and just kept cranking it down until it sounded right. That was the real sound of the 1930’s recordings – no top end!